Solider Field has been a haunted house for the Vikings for most of this century. Can Minnesota finally exorcise the ghost of Chicago losses past?

Share All sharing options for: Vikings at Bears Preview and Week 8 NFL Picks: House of Horrors

It's the day after All Hallows Eve. A deep fog and unforgiving chill sweep over a depressingly dreary city riddled with corpses. You enter a gigantic, gaping, ominous structure that surely could not have been created by the hands of man.

You've been here before. The macabre reputation of this wretched place is all too familiar. Your skin crawls like a million insects the instant you enter. Many of your allies have met a grisly fate within this frightening structure and returned home as hollowed-out corpses. Your close your eyes and hear the haunting moans from years past. The copper smell of long-dried blood creeps into your nostrils the moment you set foot on this cursed ground.

And then you see them. The ghouls and spirits that had their fun the night before are supposed to be gone by now, but the group of wicked creatures you encounter in this unholy place are somehow even worse. Their hideous garb is stained the colors of hellfire and a shade of blue darker than the souls that used to inhabit their bloated bodies. Thousands upon thousands of these grotesque creatures are packed on top of each other in this abysmal arena, reeking of the dead flesh they feast upon for days on end. They join together to chant in tongues and worship their pagan gods. These ferocious fiends have appeared from the ether for exactly one reason: to revel in your demise.

Next, you see the opponents you are set to do battle with on this unearthly enclosure. Decades ago, this army of Monsters destroyed everything in their path. Today, these zombies aimlessly shuffle about as they endure defeat after defeat. This once proud and fearsome tribe is now led by a lifeless, soulless shell, completely dead in the eyes and devoid of any human emotion.

Anywhere else, dispatching these facile foes would be a simple task. But for some reason, this ground affords them powers you are helpless to overturn. You try to run, but the uneven earth opens up beneath you to swallow you whole. You launch your trusted aerial assault only to have your weapons fall harmlessly to the ground or intercepted by your enemies. Your once fortified defenses wither away like an unkempt garden in winter. You try to gather your wits for even a fleeting moment but your senses feel as though they were wired backwards. Your eyes dart back and forth, desperate to glimpse any sign of life, but even the clocks are dead. Time stops once you enter this forsaken field, trapping you in its vortex forever.

You slowly come to the realization that defeat is inevitable. Everything goes dark. You succumb to death's icy grip and fade away into oblivion. The unthinkable nightmare you have suffered from for most of the past decade has once again come true.

As Chris already touched on Wednesday, it's incredibly fitting that the Vikings will visit the Chicago Bears on Halloween weekend. Soldier Field has truly been a house of horrors for the Minnesota Vikings, who are 1-13 in their last 14 visits to the Windy City. So what can the Vikings do to reverse the curse?

Holding onto the ball would certainly help. The Vikings have forced 13 turnovers during their current seven-game Chicago losing streak, which is a pretty respectable number until you find out they still have a -5 turnover margin in those games. In the Week 7 Stock Market Report I was a little tough on Teddy Bridgewater by saying he could have avoided taking a couple of the sacks he endured against the Lions. But you know what? It's certainly better than heaving it up and turning the ball over on the road. Bridgewater lived up to his #GUMP nickname because he really was great under major pressure in Detroit. He faced it on 21 of his 39 dropbacks according to Pro Football Focus and went 12/17 for 149 yards and a score in those plays.

And yes, Bridgewater is going to face more pressure on Sunday. The Minnesota offensive line would allow pressure from just about anyone these days but this Bears team can get after the quarterback a bit. Chicago's pass rush starts with Pernell McPhee, who has been an absolute beast this season. Remember the horrific experience T.J. Clemmings had against Von Miller in Denver? Don't be surprised if McPhee gives Clemmings just as much trouble:

I'm guessing Baltimore wishes they had McPhee back this season. But other than McPhee, nobody on the Bears front seven stands out above the pass rushers the Vikings have already faced this season. So if the offensive line can buy enough time for Teddy to see the field, there should be all sorts of opportunities for Stefon Diggs to continue the ridiculous run he's on. Chicago isn't giving up a ton of yards through the air but they have allowed the third highest quarterback rating in the league. The days of the ball-hawking, hard-hitting Bears secondary are long gone.

I promise I'm not trying to jinx Teddy into throwing five picks on Sunday here. I fully realize the game is still being played at Soldier Field. But the Bears are tied for the most points allowed per game for a reason. The defense just isn't that good.

The offense still has a few weapons though. We all know how Matt Forte can carve you up on the ground or in the passing game. We all know that Martellus Bennett is a big matchup nightmare. We all know that Brandon Marshall is gone but Alshon Jeffery can still make some ridiculous catches in traffic:

And we all know that America's favorite harbinger of apathy, smokin' Jay Cutler, will continue to be his mediocre self. Yet he hasn't lost to the Vikings at home in his career because he always seems to play just a little better against them at Soldier Field.

One way to prevent Cutler from excelling on Sunday is giving him the Matthew Stafford treatment. Chicago's offensive line is every bit as shaky and beat up as the line Minnesota will be trotting out. The Bears start our old pal Vladimir Ducasse at right guard--on purpose! Left tackle Jermon Bushrod should probably be back for his first game since Week 3 but it's not like he was playing at an All-Pro level when he got knocked out. The Vikings should be able to wreak havoc on Cutler even without the services of Sharrif Floyd, who will likely miss his second straight game. The defense will continue their impressive season if they can accomplish these three things:

I'm sick of talking about this losing streak. I'm done with having only two wins this century in a place that has been much more conducive to victory for many other teams. I'm not listening to the fact that John Fox is so great in his career coming off a bye week.

For on Sunday, it will no longer be All Hallows Eve. It will technically be All Saints Day, but they suck so we'll just call it All Vikings Day instead. And on All Vikings Day, all Vikings will finally band together and break the curse. Blood will be shed no more. The evil that surrounds this foul place will be sent back to the underworld. For if there was ever a man that could exorcise the Vikings' demons hovering over Soldier Field, it's Mike Zimmer.

For more on the Bears

The Legend of Dan Campbell has been a fun story so far, but this chapter isn't going to be as fun for Miami fans.

Another blockbuster matchup the NFL is making London fans endure. No matter what happens, at least someone that the Vikings have already beaten this season will actually get a win!

My Survivor Pool pick of the week, now 5-2 after the Cardinals hung on against Baltimore Monday night. The good news for Tampa is that they won't have a 24-point lead to piss away this week.

This 100% hinges on Ben Roethlisberger playing. If he doesn't play, I'm switching this pick. If he does play, I'm finally getting Antonio Brown back as a viable fantasy play!

Chris Johnson is having the most unlikely comeback since Surge soda. I have no idea how either one happened but I guess they're both kind of fun to talk about.

The winner of this game will be within striking distance of the division lead. The AFC South is worse than Surge soda.

I think it's very possible that Todd Gurley AND the Rams defense outscore Colin Kaepernick by two touchdowns in this game.

Because I refuse to live in a world where this Saints team has a .500 record.

It's the dueling banjos of horribly disappointing AFC teams! Let's just go to the Gratuitous Picture of the Week before these two fan bases get any more depressed. 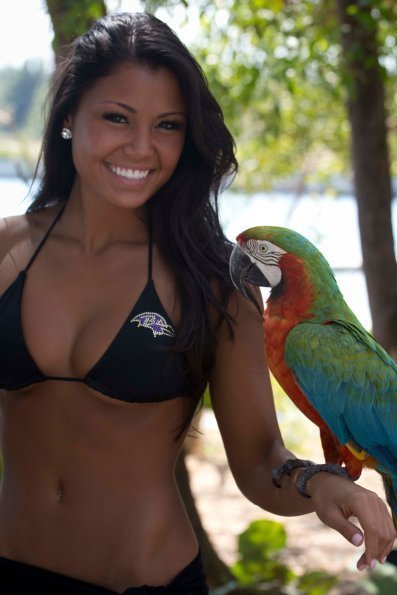 "Will we ever have the higher score? / Even this parrot's saying 'nevermore'!" (image via baltimoresun.com)

Raise your hand if you thought these two teams would have four more wins than the two teams in the game I just picked. If this were any other year I'd have at least a dozen punchlines ready for both teams. Instead, this is simply a pretty good late afternoon matchup with possible Wild Card implications. It feels super weird.

It's either going to be "THIS GAME SYMBOLIZES THE PASSING OF THE TORCH TO THE NEXT GREAT QUARTERBACK!" or "PEYTON MANNING MIGHT NOT BE WASHED UP YET!" Either way, I'm going to be