Hello. I’m attempting to decipher the chicken scratched notes I took during the game and relay a viable recap, along with some armchair knee jerk analysis. Bear with me. At this point in time, I possess neither the technology nor the capital to implement a comprehensive film study into my notes. Furthermore, I am no expert. I am just a guy with a sore back in his living room, sitting on the couch next to his cat, out flanked by an array of chips and snacks, and writing in a mystery stained notebook, which is also my to do list: 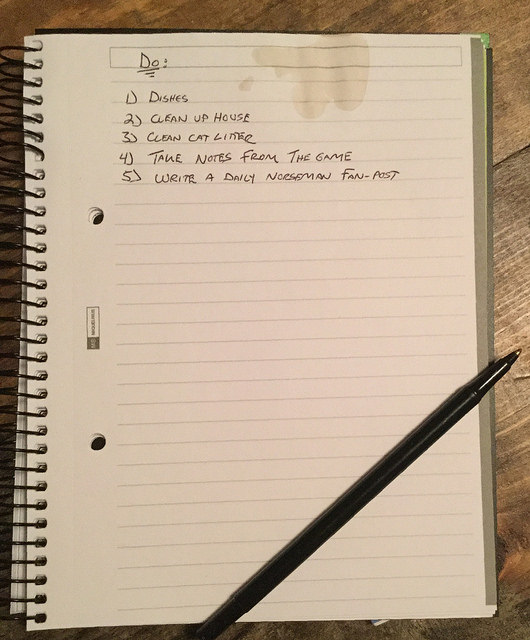 Additionally, I’m a blundering multi-tasker. Jotting down notes while cognitively perceiving things happening on the television screen has proven to be a formidable task, resulting in the incomprehensible alien symbols i’ve penned such as these: 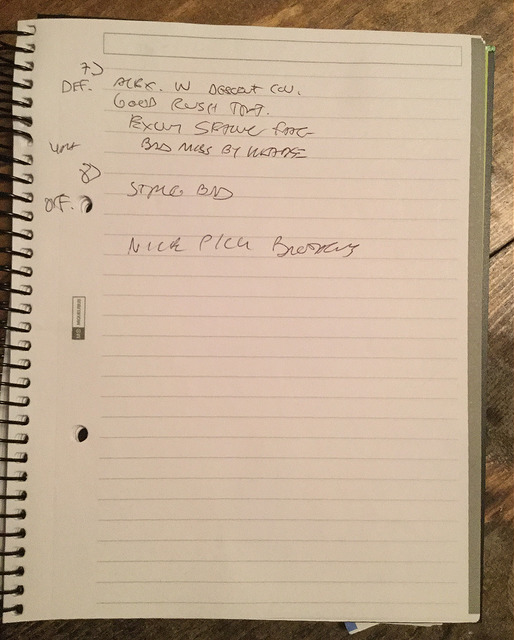 Okay. Now that I have self deprecated myself to a point where I have no self esteem, I’m proud to say that this is my first fan post, and that I can finally cross this off my to do list, along with the dishes, and the cat litter. As Dennis Hopper in Water World (one of my favorite movies of all time) trumpeted in a speech addressing a crowd full of oil tanker people, "We’re talking progress, here!"

First and foremost, my favorite thing about the San Diego Chargers is not Dan Fouts, the legendary Air Coryell offense, Phillip Rivers, or even Ladainian Tomlinson, but instead their nightmarish mascot, "Bolt Man". Google image it. You'll see what I'm talking about. I’d also like to mention, that Its been pointed out to me that Bolt Man’s facial features eerily resemble to that of actor Jack Nicholson.

So, Viking fans have been anticipating this moment since the days of Red McCombs pumping his fist in the air, and shouting, "PURPLE PRIDE !!!". From the Metropolitan, to the Metrodome, to TCF Bank Stadium, the Vikings have finally ventured into their new home at US Bank Stadium.

The Metrodome was known for two things: loathed by many, but biologically necessary, was "the trough", which was the mile long urinal where temporarily peripherally impaired men stood shoulder to shoulder paying rapt attention to a local advertisement or a smudge on the wall. The most regarded aspect of the Dome, however, was the ear drum blowing crowd noise that shifted a competitive advantage toward the home team. With that said, the question on a lot of minds was, "Is it going to be loud?". Likewise, Mike Zimmer expressed on a couple of occasions that he hoped it would be loud, but added that fans needed a reason to cheer. It is the latter that I will focus on here.

After Cordarrelle Patterson brought back the opening kickoff in the new stadium, the offense took the field with starting tackle Matt Kalil, center John Sullivan, and of course Adrian Peterson on the sideline. First of all, even omitting his 45 yard dash, I thought Jerrick McKinnon looked great, if not fantastic today. His reads and his cuts looked sharp. Most encouraging to me, was the lack of negative run plays, and his ability to create yards after contact at the line of scrimmage. This was an issue for the offense last year, particularly with Peterson carrying the rock. Overall, I felt the offensive line played well, especially the interior. I believe it was Joe Berger who had a nice block to spring McKinnon on that long run. As for the bookends, T. J. Clemmings got the start today at left tackle. I felt T.J. Clemmings looked like, well…T.J Clemmings. The first drive he looked okay, but I think he was getting help. Other times, Teddy had to either evade the rush or step up in the pocket. Again, we can praise the interior of the line for sustaining that pocket. However, I gotta say there were a couple plays Clemmings made that should give Viking fans a glimmer of hope. The first came sometime on the second possession, and it was actually on a play Clemmings got destroyed by the edge rush. He demonstrated some good athletic ability to recover at the last second to prevent Teddy from being blindsided. The second play came on the Teddy/Rudolph pitch-catch-fumble. Again, he demonstrated some good punch against the rush. Unfortunately, the other tackle, Andre Smith gave up pressure on the other side.

The wide receivers continue to shine. In fact, Stefon Diggs looked crisp in his routes, and overall appears ready to have a big year as Teddy’s top target. Laquon Treadwell did that thing he was drafted to do—catching contested balls—as he brought in a Shaun Hill pass for a 2 point conversion. Patterson appeared from time to time. He was caught in the backfield for a six yard loss on a Patterson designed run. But hey, he did score a touchdown! Kyle Rudolph had a good game hauling in some nice grabs including a touchdown in the two minute situation. The Rudolph fumble eerily reminded me of the Peterson fumble in the playoffs. A defender engaged him, while another came in to strip the ball away. Adam Thielen did not make a catch. I don't know if he was able to get open or not. I couldn’t see. Also, I have scarcely seen Moritz Boehringer this preseason, and not at all today. The lack of snaps cater to my theory that the coaching staff is attempting to sneak him on to the practice squad without getting snatched up by another team. Either that, or he just isn't good.

Teddy Bridgewater played the entire first half, finishing 12 of 16 for 161 yards, and one TD, after orchestrating a brilliant two minute drill hitting Charles Johnson, Stefon Diggs, and Kyle Rudolph on consecutive passes. He displayed great movement within the pocket, and good accuracy on his delivery. Shaun Hill and Joel Stave continue to exceed expectations considering some of the ghastly reports coming out of practices. Stave was stripped sacked, which wasn’t really his fault as the back up tackle situation has become a glaring concern to me over the preseason.

Running back C.J Ham continues to impress, not just with his abilities, but more so the consistency in which he displays those abilities. That is something unexpected from a rookie, and an undrafted rookie to boot. There was nothing flashy about his runs today, yet he demonstrated good vision, patience, and short area quickness in traffic.

Everson Griffen, Xavier Rhodes, and Eric Kendricks did not play—and it made a noticeable difference in the defense. The starting team pass rush was good, but not as dominant as we’re accustomed to seeing with Griffin blowing up the edge. From what I could glean, the run defense looked good. Some of Melvin Gordon’s bigger runs in the early going had more to do with linebacker responsibilities than anything else. Gordon’s 39 yard touchdown run was first of all, a good check by a veteran quarterback. Secondly, it was an excellent display of Gordon’s world class speed. Thirdly, Michael Griffin who started at safety today, took a horrible angle. Aside from that, it was good to see Sharrif Floyd back out there, and I thought he looked good. Routinely, Linval Joseph was a behemoth that moved quickly in the middle. He put a whopping hit on back up quarterback Kellen Clemens. The back up defensive line also looked good against the Chargers backups. Toby Johnson had some nice plays getting to the backfield, as he has done throughout the preseason. Justin Trattou continues to be a terror off the edge notching a strip sack, and later was credited with another sack. At this point, it's not a reach to think Justin could find a starting role on a bunch of rosters across the league.

Trae Waynes played great. His coverage caused a tipped Harrison Smith interception off the arm of Philip Rivers. Despite being penalized for suplexing a Chargers receiver, he came back on the very next play and had a nice tackle on a quick screen. Overall, his coverage was pretty good throughout the game. He has significantly improved from where he was at this point last season. Mackenzie Alexander also had a great game. It seemed like he was frequently in excellent coverage on the receiver. He had a near interception bounce off his hands in the end zone from third string quarterback Mike Bercovici. On the next play, however, Alexander made a great play on the ball to secure it this time for his second preseason interception. Unfortunately, he exhibited a little immaturity as he received a taunting penalty, and consequently, an ear full from Zimmer on the sideline. Jayron Kearse also tallied his second preseason interception courtesy of Mike Bercovici’s wildly errant Josh Freeman throw that transcended space and time and landed right in his breadbasket. In any case, we were able to see Kearse’s return ability, taking it 38 yards downfield. Also, I should note that Antone Exum left early with an injury after a special teams play. It goes without saying, this does not help his outlook in regards to the 53 man roster.

Blair Walsh wasn’t challenged. He was asked to kick from 23, 23, and 33 yards out, but it was good to see them all go through in the first game in the new stadium. As for John Locke’s punts? Nothing to write home about. Overall, I thought punt and kick coverage was good, including a devastating Terrance Plummer hit on one of the Chargers’ ball carriers. There were no real notable returns. However, I noticed at least a couple of times the returners slipped on the new surface, which might be expected.

The Vikings continue their preseason domination, forging an 11-1 record under Zimmer. While winning in the preseason is not indicative of how a team performs in the regular season, I will say this: Watching this team in the preseason over the last couple years it is apparent that the depth of the roster by and large eclipses the opponent’s roster, resulting in wins. As roster trimming looms as early as Monday, it is inevitable that some good players are going to be cut. What does this all mean? To me, that is an indication that this is an organization that is on the verge of making a title run. Then again, I’ll admit, perhaps I’m just sipping on a little purple Kool-aid, but I'll concluded in the words of Dennis Hopper in (Bridge) Water World, "Dry land (the super bowl) is not our destination, it is our destiny!"