Vikings Going Back to the Future on Defense?

Potential new wrinkles on defense from the Vikings past

Share All sharing options for: Vikings Going Back to the Future on Defense?

I did a piece about a month or so ago looking at potential changes to the Vikings’ defensive scheme, as Zimmer expressed a desire for new ideas this off-season, and made a number of coaching changes that may be part of his plan for a new look on defense.

In that last piece I wrote about potentially going to a 3-4 defensive front, or using a hybrid front, but parsing some of Mike Zimmer’s comments, and taking a more detailed look at the background of the new coaches he’s hired, leads to a slightly different, but perhaps more likely, conclusion.

It may be that the Vikings go with a 4-3 Under Front as their base defense, rather than a 4-3 Over Front Zimmer has used in the past, and use more Cover-3 on the back end. This is the defense that Pete Carroll made famous with the Seahawks and the Legion of Boom years ago, and has since spread via his coaching tree to Atlanta, Los Angeles (Chargers), San Francisco, and Jacksonville.

Let’s take a look first at why that may be the case, including recent hires and Zimmer’s comments, and then a more detailed look at the scheme, it’s history with the Vikings, and how the Vikings current roster fits with it. Finally, let’s take a look at how going to this scheme may effect the Vikings draft decisions in the upcoming NFL Draft.

Not Such a Drastic Change

Since Mike Zimmer hired Dom Capers as his defensive assistant to help provide him with new ideas, or at least a different perspective, there has been speculation and questions whether that could lead to a 3-4 defensive front, as that is what Capers had used for many years as a defensive coordinator. Zimmer’s initial response was that he was intrigued by Capers having been around a long time, and what he’s done with pressure packages, and just having another set of eyes to look at what they’re doing defensively, offer suggestions, etc.

“I don’t think it would be drastic, like going to a 3-4. It might just be changing some of the pressures, coverages, and fronts.”

Capers had served in the same capacity last year in Jacksonville, who also had a 4-3 Under Front, using mainly Cover-3 zone on the back-end. The Jaguars defensive coordinator Todd Wash, who came to Jacksonville from Seattle- where he was defensive line coach under Pete Carroll.

Later, at the Combine, Zimmer was asked again about Capers and installing a 3-4 defense, and his answer was a bit different:

“If that’s what we had to do, but I don’t think it would be drastic, like going to a 3-4,” Zimmer said. “It might just be changing some of the pressures, coverages and fronts.”

Zimmer went on to say about switching to a 3-4:

”That part is always about personnel, so if we get two big 5-techniques and a nose tackle and two big outside linebackers, yeah, I could see that, but you have to commit to that before free agency and the draft. When I was in Dallas with Parcells, we drafted Chris Canty and DeMarcus Ware and Marcus Spears and signed a 3-4 nose tackle. You have to commit to those things before the draft starts.”

Nose tackle Michael Pierce, who the Vikings signed to replace Linval Joseph, came from a 3-4 scheme in Baltimore, but could also be a nose tackle in a 4-3 scheme. And based on Zimmer’s comments, a 3-4 scheme doesn’t appear to be the most likely direction for the Vikings defense: “It might just be changing some of the pressures, coverages, and fronts.”

Let’s take a look at each element, starting with fronts.

There are two commonly used basic alignments in a 4-3 base defense. One is the 4-3 Over Front, which Zimmer has used as his base alignment in the past, and the 4-3 Under Front, which the Vikings used years ago under defensive coordinator Floyd Peters, back in the late 80s and continuing into the 90s, after Peters left.

Below is what a 4-3 Under Front looks like. This is the base front, typically used against 21 Personnel - 2 RBs and 1 TE. You can use the image slider for both strong left and strong right formations, which mirror each other: 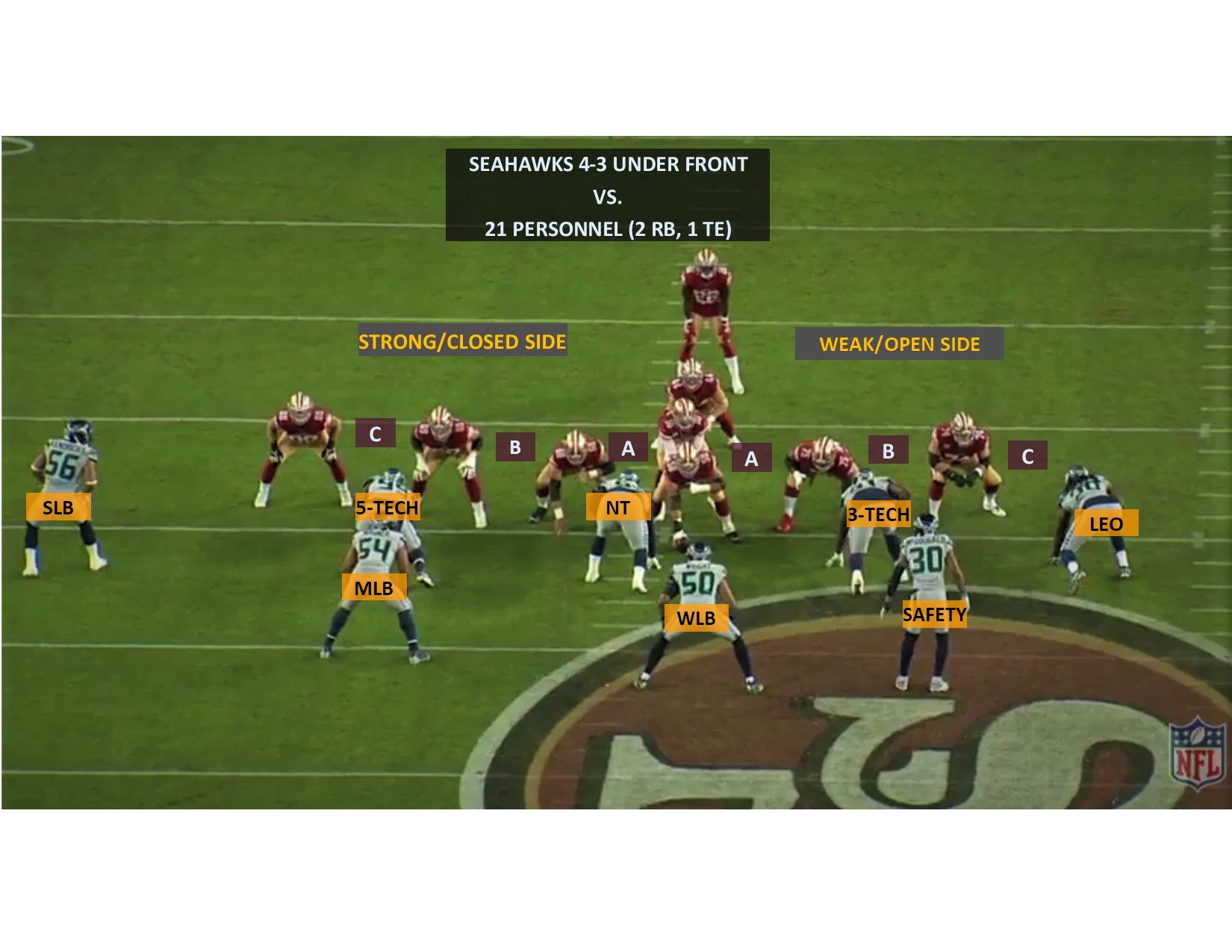 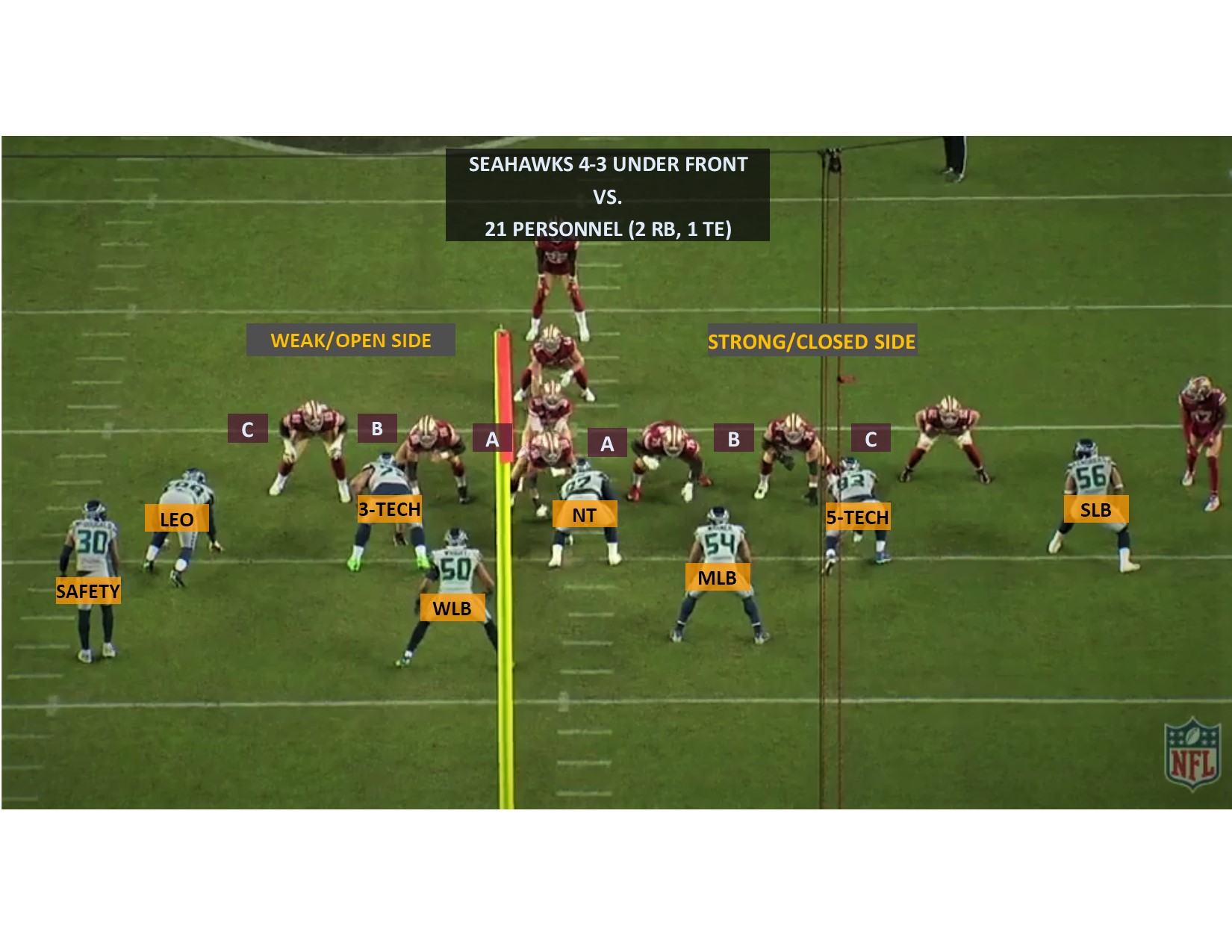 Looking at the players at or near the line of scrimmage, that looks an awful lot like a 3-4 defense: essentially three interior linemen and two edge rushers. In this case, it’s really four defensive linemen and one linebacker that make up the Under Front.

Compare this to the 4-3 Over Front that the Vikings have typically used in the Zimmer era, once again against both strong left and strong right formations using the slider: 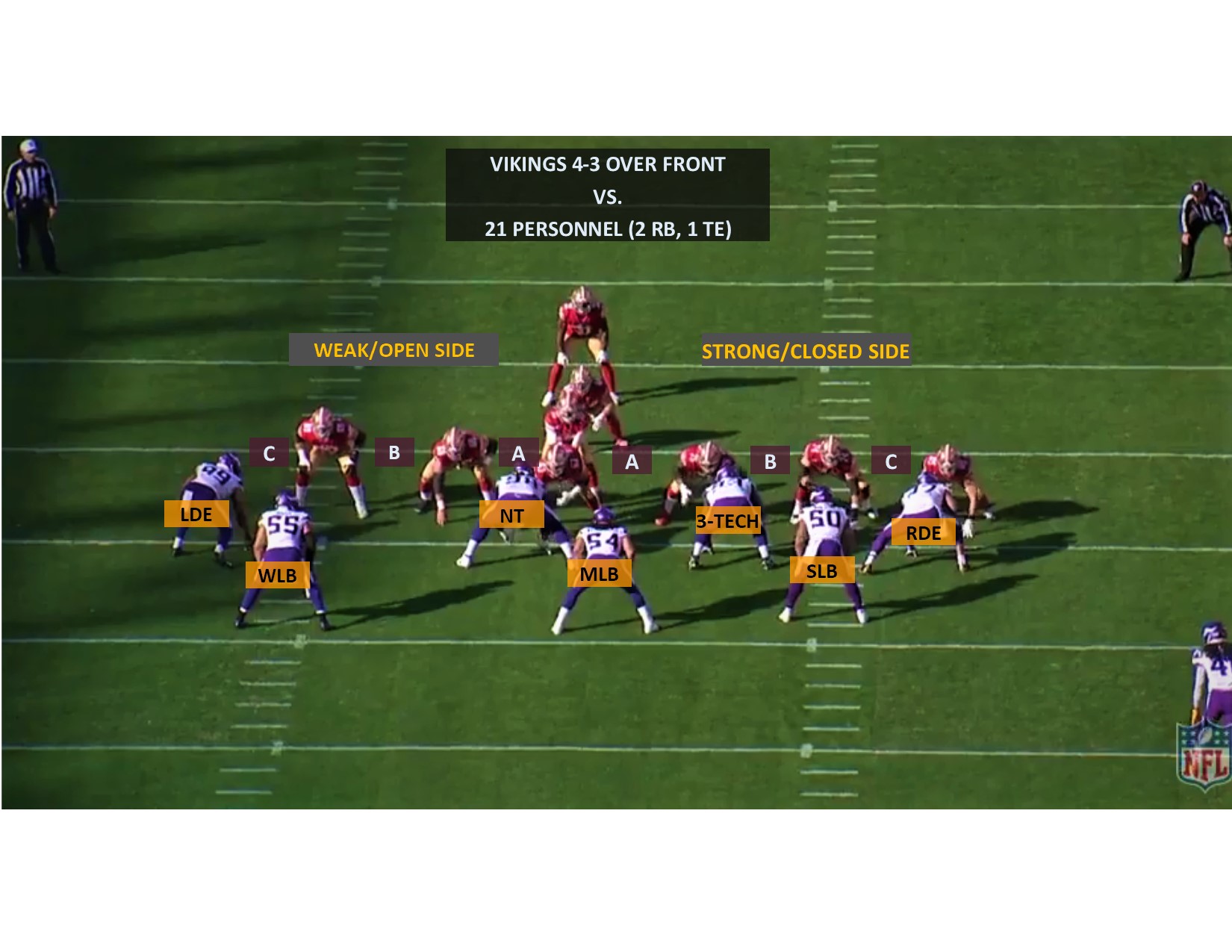 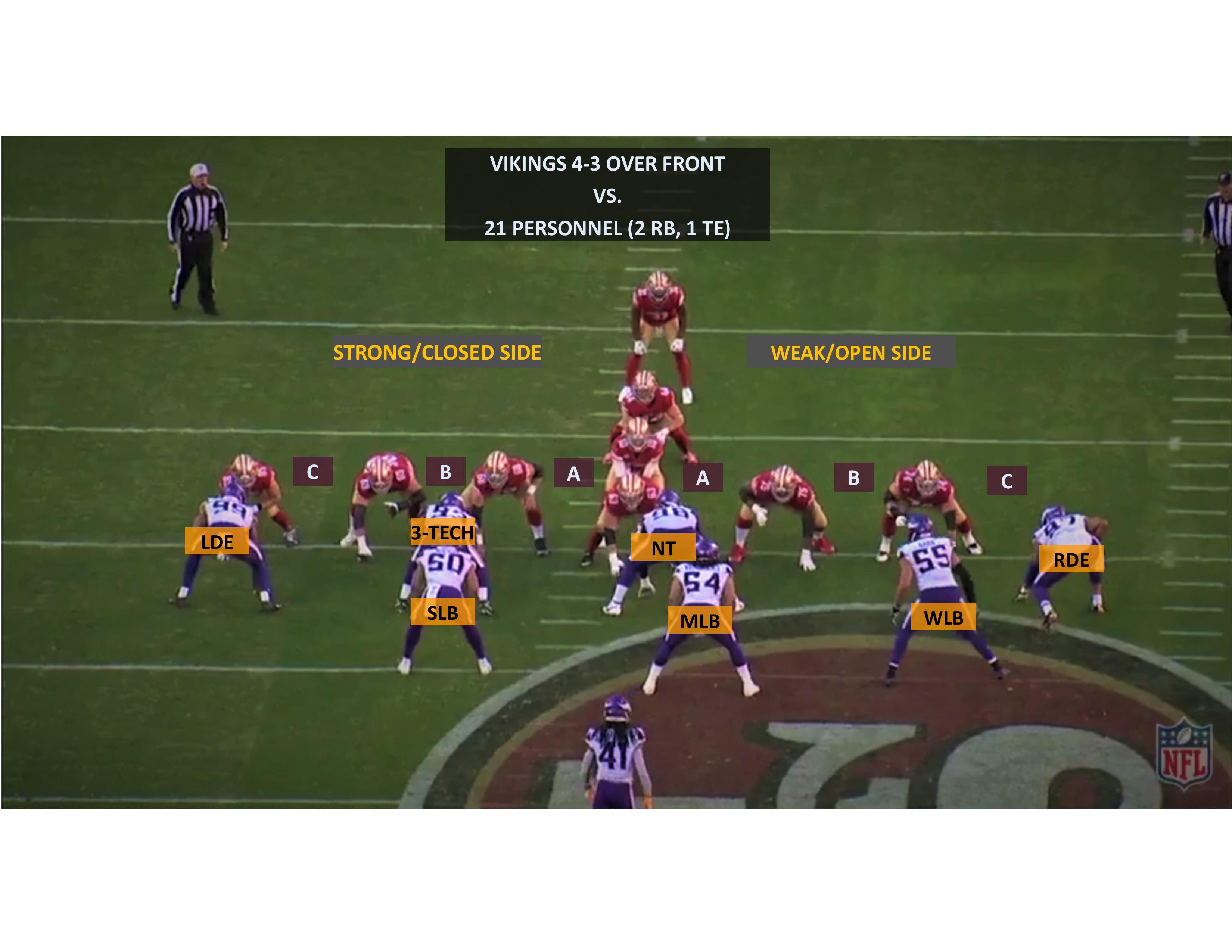 In the Over alignment, the defensive linemen are shifted toward the strong side of the formation, with the 3-Tech on the strong side, and the B-gap on the weak side left uncovered. Additionally, the SLB and WLB shift according to the strength of the formation as well. For the Vikings, they typically do not shift their defensive ends. Danielle Hunter almost always plays the LDE, and Everson Griffen almost always played the RDE.

Typically in a 4-3 Under Front, the defenders on the strong side are mainly responsible for run defense. The best pass rushers play the weak side positions of 3-Tech and LEO, where they have the most space and freedom to rush the passer. Being on the weak side, both players are likely to have 1-on-1 match-ups with the weakside guard and tackle.

Back in the day under Floyd Peters, and his successors, the Vikings had Chris Doleman as the LEO, or weakside defensive end, and first Keith Millard and then John Randle as the 3-tech on the weakside. All three players had extraordinary success in that scheme. Doleman and Randle are HoFers, and Millard was the NFL Defensive Player of the Year in 1989, the year before injury cut his career short. The Vikings had 71 sacks that year - 2nd highest all-time. The Vikings also had success later with Kevin Williams (3-tech) and Jared Allen (LEO) in those roles.

In a 4-3 Over Front, the RDE is typically the best pass rusher, along with the 3-Tech. The LDE or base defensive end, typically has more run defense responsibilities, but should also be a good pass rusher. In the Zimmer era, Danielle Hunter has been the LDE, and Everson Griffen the RDE, while the starting 3-tech has varied year-to-year.

One of the reasons Mike Zimmer has likely been looking for new ideas schematically is because his roster is changing. And there is also the constant evolution and adaptation of scheme to best suit player strengths and put them in the best position to succeed.

Comparing a 4-3 Over to a 4-3 Under front, it’s difficult to see how an Over front is best suited to the current Vikings personnel.

Looking ahead, now that Everson Griffen has moved on, it’s clear that Danielle Hunter is the Vikings best pass rusher, which has probably been true for a year or two really. Given that, it doesn’t make sense to keep him at LDE in a 4-3 Over Front. At a minimum, he should be moved to the RDE spot, and a replacement found for him at LDE. But even then, in a 4-3 Over Front he can get washed out if he’s on the strong side and the offense goes 2TE on his side or adds another lineman, effectively making him an undersized 5-tech absorbing double-teams.

Hunter would be much more effective as a LEO in a 4-3 Under Front. Then he would be on the weak side, and have the ability to rush the passer in space, making the most of his prototypical edge-rusher skill set.

The Vikings’ new free-agent acquisition from Baltimore is ideal for the nose tackle spot in either alignment. Not a big deal either way for him.

Stephen is better suited as a 5-Tech than a 3-Tech in a 4-3 Over Front. He doesn’t have the quickness or pass rushing skills preferred in a 3-Tech in either alignment, but could do fine as a run-stuffing 5-Tech in a 4-3 Under Front.

Ideally, Armon Watts beats Stephen out for the 5-Tech spot in an Under front and Stephen serves as a back-up to both 5-Tech and NT. Watts could also rotate at NT on passing downs.

The Vikings don’t have a proven 3-Tech on the roster, but Mata’afa maybe the best fit. He has the quickness, and more recently the size, to be a full-time 3-Tech. An Under front would be more suitable, however, as he’s more likely to have a 1-on-1 match-up with some space, which is how he is likely to do best.

The best draft prospect for the 3-Tech spot would be Javon Kinlaw, although the Vikings would likely have to trade up to get him, perhaps even having to use both first round picks to move up far enough to get him.

Barr is a highly paid player with an impressive skill set, but he hasn’t been as productive in recent years. Using him as the SLB/SAM in a 4-3 Under Front could help maximize his skill set as a pass rusher and run defender. Having a 5-Tech to help with the tackle would give Barr more freedom to roam in run defense or rush the passer. He’s not as good in man coverage, and so using him in this role, and having cover a shallow flat if need be rather than cover a TE (Harrison Smith has been doing that or Eric Kendricks) may be a better way to use Barr more effectively. And if the TE motions, Barr could effectively become the LEO and rush the passer accordingly. He may also be more effective as a blitzer off the edge, rather than through the interior.

The other defensive linemen on the roster, namely Jaleel Johnson, Jalyn Holmes, Ifeadi Odenigbo, and new acquisition Anthony Zettel among them, would most likely server as backups and rotational pieces. Odenigbo at LEO, Zettel at 3-Tech, Jaleel Johnson at NT or 5-Tech, and Holmes at 3- or 5-Tech. It’s also unclear if some of those players will continue to be a part of the Vikings roster going forward.

Clearly what changes, if any, the Vikings make on defense will effect their approach to the Draft. If they elect to stay with a 4-3 Over front, drafting another defensive end would be a high (1st round) priority. Finding a better fit at 3-Tech would also remain a need.

On the other hand, if they decide to move forward with a 4-3 Under front, the need for another defensive end isn’t as big a priority, but perhaps a 5-tech or 3-tech would still be higher on the list. That could also explain (along with salary cap) why retaining Everson Griffen wasn’t as big a priority.

Mike Zimmer is looking to make changes on defense this off-season, and those changes could very well include changing the approach on the defensive line. Adapting scheme to better suit player’s abilities is an on-going process with just about every team. And with more changes on the Vikings roster this year, it wouldn’t be surprising to see more scheme changes as well.

Next up we’ll talk more about possible changes on the back end of the defense, and how that may influence the draft and other considerations as well.

Do you think a 4-3 Under front is better suited for the Vikings defensive personnel ?

This poll is closed