How good is Dallas?

No, really how good are they? This isn’t supposed to be a rhetorical question. With an extra week to prepare I’m trying to figure out who they are. Are the 3-0 Broncos who looked good beating up some terrible teams but have since proved to be only OK? Are they in the Cardinals & Bucs territory where they are legit Super Bowl contenders? Or are they more like the Packers who haven’t really proven anything yet?

Are they bona fide?

For this question I’m going to use a non-scientific breakdown of teams into good / bad / average categories. My breakdown is:

Answer: The Cowboys' record is for real.

Is that +59 scoring margin legit?

I like looking at scoring margin almost more than record. If I start with assumption that all NFL teams are good, then a high scoring margin matters and the Cowboy’s margin is 3rd in the league behind the Cardinals +85 and Bills +105. So how did they get to +59?

-2 vs Bucs in week 1. Closes losses don’t hurt margin that much, but this was perhaps a bit lucky. In this game, the Bucs were up 2 and fumbled at the goal line going in for a TD with 5 min to go in the game. The Cowboys were lucky this was close.

+20 blasting the Eagles getting a defensive TD and a short field TD in the 4th quarter after the Eagles turned the ball over on downs. The Eagles are about 30 seconds from making it onto my bad team list, so this big margin doesn’t impress me that much.

+24 from the destruction of the Giants. A late defensive TD that meant nothing. Daniel Jones getting concussed and Mike Glennon throwing 2 picks. This is a good team running up the score on a bad team. Just because the Vikings don’t do this, doesn’t mean I’m going to be impressed when another team does.

Answer: the Cowboys +59 scoring margin is not as intimidating as it seems. I find the Cowboys about as threatening as a +39 team (similar to the Saints +36 and Bengals +37)

How to beat the Cowboys?

So the record is legit, but the scoring margin makes them seem less formidable. So what did other teams do that the Vikings might be able to exploit?

Turnovers: starting with turnovers is almost cliché, but the Cowboys are an outlier here at 14 turnover generated. They have at least 2 turnover in every game. This is something the Vikings will test with only 5 on the season. I think the Vikings are in a good spot to slow Dallas' turnover flood. But this can’t be the answer, there has to be more to beating Dallas than "don’t turn the ball over." Turns out there is.

Dallas has the number #5 rush defense in the league at a paltry 86.2 Yards per game…. But they allow 4.3 yards per rush, the same as the league average… that’s a bit strange to be average at YPC but very low total, but hold on to that stat for a minute.

Dallas’ pass defense is much worse, 3rd worst in the league at 295 yards per game, right between the Jaguars and Dolphins… they give up 7.4 yards per pass attempt, league average is 7.4.

Dallas on the offensive side of the ball is much more efficient than their defense. Looking at the scoring efficiency of drives:

Come back to that stat I told you to hold on to: Dallas’s rushing defense. Dallas’ opponents have 20 rushing attempts with a lead in 6 games. It’s not that the Cowboys' run D is great, they give up 5.3 yards per carry when the game is tied. With a high scoring efficiency and at least 2 takeaways per game, the reality is that opponents trail for so long that they don’t get to test the Cowboy’s run D. Because of their turnovers and long drives, Dallas is getting about 10 more plays per game on offense than their opponents.

Now here is the key to beating them. I expected to find that with CeeDee Lamb, Amari Cooper, Zeke & Dak, Dallas scored quickly and blew people off the field. And that the worse their opponent was, the faster they would get blown away. This was not true. Check out the average # of Plays to score a TD in a Cowboys game. 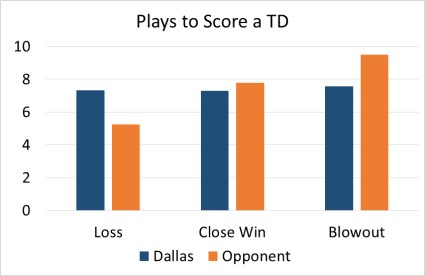 In every case, Dallas had a tendency for long, sustained TD drives. The difference was how fast their opponent scored; bad teams took a long time to score and could not climb back into a game after a turnover. Dallas’s offense is actually slightly worse when trailing.

Dallas isn’t a team that come out and blows people off the field. They are a team that grinds their opponent down methodically. To beat them the Vikings need a strong start and to keep the game close. Good news on that front, Cousins passer rating is best early in the game:

If the Vikings can take an early lead or even keep the game to a 1 score game, they have the skill (especially in the passing game) to score and keep the Cowboys off balance. And Dallas has a tendency to give up easier drives to teams with good skill positions. However if Dallas gets more than a 1 score lead, they will be very difficult to catch because how efficiently they chew up game time.

Answer: Cousins, Jefferson, Thielen and the O line better come to the game ready to execute from the 1st play.