I see a lot of doom and gloom and "we are going to suck" being thrown around. Yes, our defense sucks. Our offense did pretty well by most metrics out there. We're set on skill positions and still need to improve the OL. Spend most of the draft on the defense, and we look like a vastly different team.

Just going to dive right into it.

It's a 2-headed beast at the top of our team for cap hit. Something has to be done with each if we want any meaningful cap space. Hunter has the higher ceiling of the two for sure, but he's only played 7 games in the last two years and also carries a steep cap hit. Plus this draft class is fairly stacked at DE, and much less so at QB.
***** Not interested in debating the Keep/ Trade Cousins piece. Don't even bring it up. Please. For all our sakes. I've done and will do mocks each way. We all have opinions and that dead horse is unrecognizable red pulp at this point. *****

Free Agency (players in bold are ones I would try to re-sign on cheap deals):

I’m assuming with the amount of cap space we’ll have we will be able to sign at least one veteran corner and possibly a center or rotational DE. If not, not the end of the world.

Hunter trade happens before the draft.

Besides QB, a top-flight edge rusher is exactly what Denver needs. They can spend their top 10 pick on a rookie QB, they have a deep IOL so losing Meinerz isn't crippling, and they have two picks in both the second and third rounds. Essentially they flip an aging and declining Von Miller and Meinerz for Hunter. Paton makes that deal every single time, especially having been part of the Vikings for the draft of Hunter and being around through his medical treatments. He probably has more background knowledge on Hunter than anyone.

Meinerz is a guy I banged the table for last year and we should have drafted over Surratt/ Jones, and we rectify that here by getting him in a trade. The latest small school standout at the senior bowl, he was turning heads with the big belly and absolutely burying DL from all of the major programs. He can compete with Wyatt Davis immediately to start at RG and/or could be a long-term option at center.

Lions trade up and shuffle some picks around with us to grab a game-changing WR in Williams. We have a lot of holes, and there aren’t any sure-fire picks at 12 that I think are head and shoulders above options later at positions we need. My goal is to get as many picks in the first 4 rounds as possible to address our aging defense.

A hometown Minnesota kid from Eden Prairie, Jermaine Johnson didn’t have your typical path to a NFL first round pick. Limited recruit out of HS with poor eligibility due to GPA, he spent a couple years in JUCO then went to Georgia. Their DL is absolutely stacked, so while he was able to flash as a rotational guy, he wanted to be an every-down starter. He transferred to FSU and put up excellent numbers in his chance to shine on his way to earning ACC DPOY. He plays strong, has a hot motor, and has active hands with a decent arsenal of pass-rush moves.

McDuffie gets more of the hype of the two Washington corners, but I think Gordon has him beat athletically. He made the Feldman Freaks list, reportedly has a 42-inch vertical and a freakish agility time on a solid frame. He’s fluid in his movement and coverage and is physical at the line of scrimmage. He had two picks this year, a completion % of 51.2% and only allowed a 49.1 Passer Rating when targeted. He has the potential to be a lock-down corner with excellent ball skills.

This one is a repeat, but good lord I’m a big fan of Walker. This dude just flat out plays football. I wouldn’t hate taking him in the first round. He’s an absolutely elite physical specimen.

He does it all. He plays DE, DT, drops into coverage, whatever you ask this kid to do, he’ll do. Good luck trying to move him off the edge with a tight end. Our interior DL was pretty stout this year, but teams were able to run it around the edge too easily. Walker helps lock that down and can kick inside for 3rd and long situations.

Muma is rocketing up draft boards, and I see him being firmly in the 2nd round conversation. Muma played safety in high school before transitioning to LB in college. He’s a 3 down linebacker that isn’t afraid to step up and fill the gap in the run game but still has the coverage chops and awareness to handle a TE or RB in coverage. He’s racked up 142 tackles, 3 interceptions (2 of which he returned for TDs), and a sack.

I suppose I probably can’t get away with an entire draft of just defense, although that idea certainly has merit with how much of a dumpster fire it’s been. McBride is a solid option for a TE2. He’s a big dude at 260 pounds, but don’t let that lead you into thinking he’s only a blocker. Only had 3 drops on 103 targets in 2020, and he’s got a huge catch radius and a surprising YAC potential. He’s a hard man to bring down.

Bryant just quietly gets his job done opposite Sauce Gardner. Our secondary desperately needs more talent and more depth. He isn’t quite the lockdown guy that Gardner is, but he’s probably the CB1 on a lot of teams. He tallied 42 tackles, 11 pass breakups, 3 INTs and 3 forced fumbles this season, and was named the Jim Thorpe Defensive Back of the Year.

This guy is FAST. I know Dean gets all the love of the linebackers for Georgia, but they are legitimately playing 3 NFL starters at LB between Dean, Tindall, and Quay Walker. He can run, he can blitz, and he can cover decently well. He probably needs a little more coaching on route recognitions etc., but he's absolutely an athlete I want on our team. Watch the first clip of him as he reads the play before Dean does, takes the better angle, and blows by Dean to make the play. Opposite side of the field toss sweep TFL.

Volson comes in as a depth piece for the OL. We can and should move on from Dozier/ Hill. We know their ceiling. Volson has a higher floor than that. He’s played at LT, RT, and has some limited reps inside as a guard. I think his NFL fit is probably at G, but he has versatility, and that’s a beautiful thing. I see him being a higher upside Udoh. 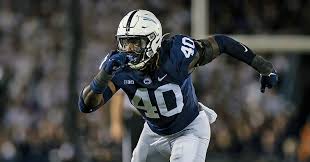 Another LB. I’m not sold on Dye, I never liked the Surratt pick, and Kendricks isn’t getting any younger. Late round picks I’m throwing darts at positions of need and elite athletes. Luketa checks both of those boxes. He’s probably more of a run defender than a coverage guy, but he’s a solid depth piece that they can coach into a serviceable coverage role on early downs. He’s also played a ton of special teams, ILB, OLB, and DE in his time at PSU. Especially if we look at a DC who wants to run a 3-4? Money. Luketa can fit just about any scheme. He’s got some serious versatility for sure.

Bubba is a unique prospect. He’s a heavy hitter and has great length and size for a safety. He’s versatile, having played deep, in the box, and in the slot. He is a strong, sure tackler, and physical in run support. He made some splashes as a rotational player his freshman year at USC, but never started a down for them. He was released from the program for an off-field incident at a party with underage drinking in 2018. He transferred to Miami in 2019. His 2019 season was ended in the 3rd game with a freak injury to his ankle during a celebration with teammates. In the shortened 2020 season, he was a semifinalist for the Jim Thorpe award and made second-team All-ACC. His 2021 season was also cut short with another season ending injury. He’s a playmaker when he’s on the field, so with the final pick in the 2022 draft we take a chance on a talented playmaker that will fall due to injury issues.

I think virtually every single one of those picks has the potential to be an instant starter on our team, with maybe the exception of Volson and Bolden. Luketa at a minimum becomes a core special teams guy and has the potential to rotate in on defense. We need young athletic talent all over that defense. I draft it in spades.