This is an exercise I did last year that I'm starting earlier this year. When I look at who the Vikings might draft in Round 1, it is based as much on who will come off the board as who will be there. This is a list based on multiple different mock drafts (currently 9)*. 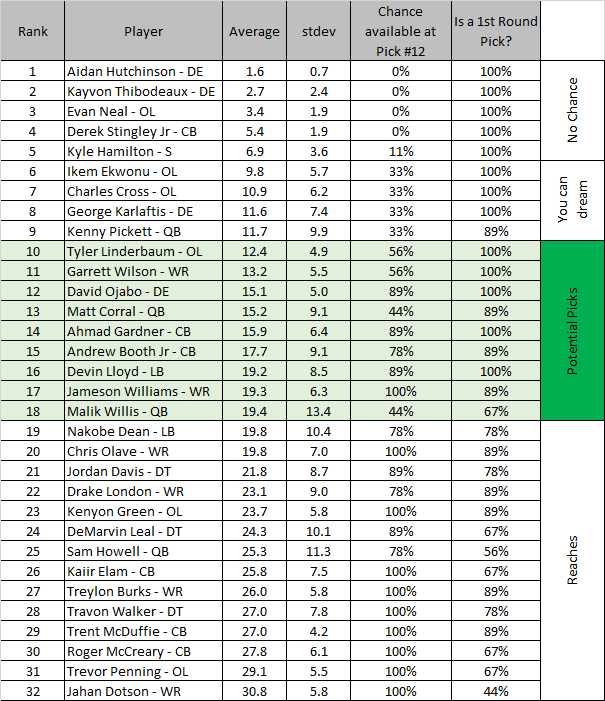 Mock drafts are always wrong, so (mostly) when someone says "A player will/won't be there", they are guessing, this gives me a sense of how confident that guess would be. This also gives an idea of how much of a shock it would be if a player falls or who might be a reach.

Also of interest, what is the standard deviation of a player? A big number there means people disagree on where a player could go, they might go early or might fall. I also added a count to see how often each player was considered to be a1st round pick at all. Normally the guys in the upper half of the 1st round will all have 100%, when the numbers start to fall off from 100 is where the draft gets interesting. I see no QBs have a 100% 1st round consensus.

This first version is nearly worthless in terms of figuring out who we will pick (last year at this time everyone was convinced the Vikings were defiantly drafting Gregory Rousseau), but it does serve as a useful starting point to see who rises, falls and by how much.

Right now the picks mocked to the Vikings were:

I'll update this a few times as drafts change

MidwinterViking has been hanging out with us lately. If you miss his great insights/discussions, here is a link to some of his discussion and analysis.