When the Vikings drafted Ty Chandler in round 5 of the 2022 NFL draft, I admit it, I really had no idea who he was beyond a guy with a fast 40 time. I do now, and what a great pick I think that was! Did the Purple already have a strong stable of RBs? Sure, but in round 5 of any draft, if you aren’t looking at best player available, there’s something definitely wrong.

I am not sure there are going to be many players drafted after Chandler in the 2022 draft (nod to Punt God!) who have the type of talent I see in Chandler. One of the first things I did after the draft was go watch a bunch of videos of the kid and I was really impressed with his burst, speed AND vision. I quickly went from questioning his pick to admiring it! He also has wiggle to his game, I would argue he exhibits more of that than Kene Nwangwu, who I think of as more of a straight line speed guy (I do like Nwangwu too!).

In case you missed it this weekend, Chandler put together an excellent performance during the first pre-season game of his career. The next time you are feeling a little down, just head over to Youtube and watch the below a few times, its like taking happy pills watching this guy run!

I am not sure that Chandler has the type of build to be an every down back, as he phsyically appears a bit slender and looks to be more of a 3rd down type of guy… But perhaps at age 24, he can bulk up a tad over the next year or two and see where that leads. Ty had a good 8.81 RAS score coming out of college, earning elite marks in the speed categories including a 4.38 40 time! The only categories he performed poorly in was his aforementioned weight of 204 and a lackluster vertical of 31" 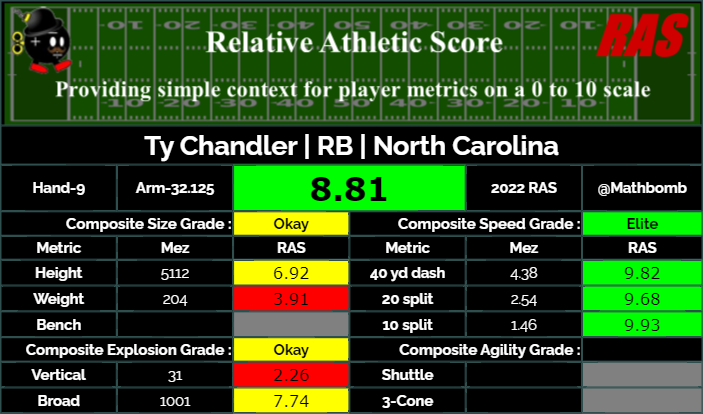 I am always excited when I see a young player show up who flashes high level potential and we have one here! I remember feeling the same way about Stephon Diggs a few years back, and I think of Ty similarly. Would Diggs be touch shoes to fill for being a great 5th round pick? Absolutely, but why not get excited about the possibilities here, I mean they don’t call him Baby Kamara for nothing! I cannot wait for the next pre-season game because I want to see more of Ty Chandler in action! Ten yards per carry? I still can't get over reading the comments after the first game and seeing a few fans say he had an "OK" game. The kid looked electric out there and if he follows that up this weekend, good luck keeping him off the field when the season starts!